I am not a teacher, I have worked in education in some form for about 15 years.Â  I took 9 years out of public employment to raise my kids and even then I was a substitute teacher a few times.

I have heard people fuss and complain about schools, kids, teachers, parents – on and on. Â  None of the complaints directed at any particular group ever rang true to me because I have always believed thatÂ  institutions reflect the greater community they reside in along with all the individual entities that make up the community.

If I think – really think, about how change is effected, problems solved, from this starting point -Â  I feel so overwhelmed.Â  How can change happen if each entity is not moved somehow?

Maybe the reverse is true.Â  Maybe each little change affects the entire community.Â  That approach seems a lot more hopeful to me.Â  That means any piece of the puzzle that I come into contact with can be a part of a positive or negative change.Â  There is hope in that and also accountability.Â  That means that every single interaction I have, somehow creates change and that brings everything down to individual responsibility.

It means that my actions and interactions need to be thoughtful and intentional.Â  It means that not only am I my brother’s keeper but each of us is the keeper of our entire local community which has it’s interaction with the rest of the global community. Â  It means that I can’t blame anyone else for the state of the world – I can only make my individual actions count.

That makes sense for the individual.Â  If the entire community thinks like me – has the same belief system, and is willing to take the same level of responsibility then we will move as a group in a particular direction.Â  The reality is, individuals have their own agenda’s, their own belief systems, and their own ideas about what is the best direction for a community to move.Â  How to we reconcile the different views and not end up simply sitting still or moving backwards and forwards instead of making progress?

If you don’t think our thinking is splintered – look at your community.Â  How many churches are there?Â  If we are unable to unite in our belief system when in most communities in this area, it all revolves around a single book then….well, you can see the difficulty.

The catalyst for this whole discussion was a website called 2 Million Minutes.Â  There is a dvd you can order and I am planning on purchasing one.Â  There are lesson plans and clips of the making of the video.Â  The premise is that our young people have about 2 million minutes to spend in high school.Â  How will their two million minutes stack up result wise to students in China or India.Â  There is an exam to take to see how you stack up.

The exam challenge is the brainchild of Bob Compton after hearing a professor at Harvard Graduate School of EducationÂ  â€œWe have nothing to learn from education systems in Third World countries, â€œMuch less a Third World country that lacks freedom of speech.â€ when he viewed the Two Million Minutes video.

The exam “is a shortened and greatly simplified version of the multi-day proficiency test that every 10th grader in India must pass to go on to the 11th grade.” 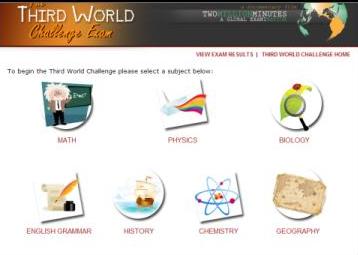 As a part of the global community, what are our priorities?Â  What are we willing to sacrifice to get there?Â  What are the consequences?