“Katniss is a 16-year-old girl living with her mother and younger sister in the poorest district of Panem, the remains of what used be the United States. Long ago the districts waged war on the Capitol and were defeated. As part of the surrender terms, each district agreed to send one boy and one girl to appear in an annual televised event called, “The Hunger Games.” The terrain, rules, and level of audience participation may change but one thing is constant: kill or be killed. When Kat’s sister is chosen by lottery, Kat steps up to go in her place.”

The boys and girls who are chosen are taken to the capital and fed, dressed, interviewed, and the entire games are televised – the ultimate in reality tv.Â  I found myself unable to hate some of the characters who were part of the cruelty and at the same time, disliking some of the “tributes” as the boys and girls are called even though they are the victims.Â  Like real life, the lines are not sharp – and the good have the ability to do evil while the evil have moments of good.

Katniss is strong and fearless and intuitive where her survival is concerned and you will be cheering her on.Â  I can’t wait to read the next one.

I’ll be passing this one on to my daughter and later donating it to the school library. 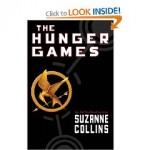 2 thoughts on “The Hunger Games by Suzanne Collins”