Tell A Tale Prompt is silence

I am normally a talker.Â  I get nervous and feel like I need to fill the spaces in the conversation.Â  The fog takes that need away.Â  I crave that silence.Â  When I was growing up we lived on the lake.Â  Summer was spent swimming. fishing, boating, and water-skiing.Â  In the winter there was ice-fishing, skating, snow-mobiling.Â  The lake was an ever present entity and our lives moved with it as the seasons changed. Storms came from the lake and sometimes blew themselves back out over it.Â  In summer there was nearly always a breeze.Â  We didn’t have air-conditioning.Â  We just opened the windows.

In winter there was snow and wind that would cut right through your coat.Â  The wind would raise around the edges of the windows quicker than you can blink and would slip in the tiniest cracks so that you could feel it sneaking in.

When it snowed at night I would go to sleep watching the flakes blown against the window by the lake wind. It would come at the window as if it were attacking it but there was no sound and at first each tiny piece would melt as it met the glass that was warmed from the house heat.Â  It would gradually pile up on the sill and when I awoke in the morning I would leave my blankets to look out at a world that had covered itself with it’s own blanket overnight.

But in the night when it snowed there was a silence so pervasive that even though the snow couldn’t get inside – the quiet seemed to grow and slip in with the little bits of wind.Â  Most people would stay inside so there was less humanity making noise.Â  Even those who ventured out would be wrapped up, heads covered with hats and scarves, heads down as they hurried to get to the next “inside”.Â  Too cold to stop and chat, moving so that the drifts wouldn’t cover YOU.

If you stood still out in it, the snowflakes would land on your eyelashes.Â  You could stick out your tongue and taste them but you better be quick because they would melt and disappear.Â  They made no sound.

When the weather was warmer and the fog came, you could sit very still and feel as though you were the only living thing in the world.Â  That silence was something you could touch and see and smell.Â  Everything and everyone moved slower, unsure within the constraints of a limited visual field.Â  Sound was muffled and you could turn and live in your head.Â  Silence that comes from slowing your very heartbeat and feeling your own pulse.Â  Silence that even slows your thoughts until you just are.

In the summer, I would dive in, pushing off the seawall and see how far I could swim underwater before I had to surface to breath.Â  My eyes were shut so all was black and the water filled my ears so there was no sound as I slid through the dark alone. 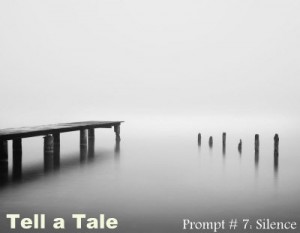