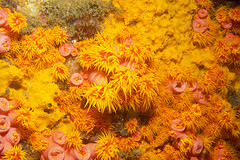 Jeff surfaced and waited to be hauled back up on to the bow of the research vessel.Â  He was gasping, not from lack of air but from horror.Â  “We were a little off on our calculations” , he told the men that pulled him up.Â  “The coral has multiplied and at the rate it’s growing it will rise out of the sea in about a week.Â  The chemistry mutation that we discovered in the lab is going to cause it to give off gas particulates that will poison the air for miles.Â  Instead of a honeymoon paradise,Â  this place will be a oceanic graveyard!”

She had shopped for weeks to find the perfect bridesmaid dresses, the exact shade of coral that would match the flowers and decorations she had seen in the magazine.Â  It would be beyond perfect!Â  After the wedding, she and Jeff would be whisked off to the island and a secluded cottage and spend days on the beach and scuba diving on the coral reef. Jeff had promised a once in a lifetime experience!

Coral’s eyes were red and she was so tired of cleaning up cottages after bridesillas and their lovesick little grooms headed off to the rest of their lives.Â  She finished making up the bed in the cottage, fluffed the pillows, dusted the night stands and wished the rest of her life meant heading off somewhere.Â  As she passed through the little kitchenette, she glanced out the window at the boat off into the distance, idly wondering what they were pulling up out of the water. Her chest was hurting and she wasn’t feeling so well.

3 thoughts on “The Reef”