“What do you think she saw?”Â  I was scribbling in the Moleskine I kept in my jacket pocket.

Jack puffed on his cigar.Â  “Hell if I know, and she ain’t telling.” He gloved up and peered around her for evidence, stepping carefully.

You could tell she had been beautiful.Â  Not anymore.Â  Jack’s words reverberated in my head and dizziness threatened to take me down. “What is that stuff on her shirt?Â Â  It looks like it’s peppered with rust.” I kept my eyes on her shirt.Â  Don’t look at the face again.Â  There was a wet tendril of saffron hair flung across her neck as though a sudden squall blew through and left no trace but those stands.

I flinched and looked away.Â  There was no one around.Â  “What do you think she was doing here?”Â  A broken sign that read “Tomorrow’s Emporium” creaked in the breeze.Â  A crow sat on a post and I felt a fierce irrational anger at it.

The photographer snapped from different angles. I didn’t envy him.Â  “I’ll see you down at the station.”Â  Jack waved and I shoved my notebook back in the pocket andÂ  got in my car, relieved to be out of there.Â  I wished I had been home asleep instead of sitting in the bar with Jack when the call came in.Â  There would be no sleep tonight.

Wordle is a great site for generating beautiful word clouds.Â  The purpose of this one was a poetry prompt but I’m feeling contrary… 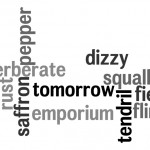 4 thoughts on “The Eyes Have It”