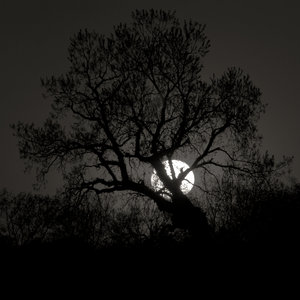 Jae’s father carried her on his shoulders.Â  They had stayed at the garden late and the sun was low.Â  She loved to work with him and now she was sunburned and tired.Â  The sun was hanging low and the sky was purple and rose. She laid her cheek on his hair and daydreamed.Â  Her stomach growled.Â  Mama would have supper waiting for them.

She heard aÂ  howl and opened her eyes.Â  Her father walked a little faster and glanced behind them.Â  “Put me down, da.Â  Iâ€™ll walk.”Â  He set her down and took her hand.

“ComeÂ  Jae.Â  I’m hungry.” They hurried as darkness fell .Â  The moon rose big and white in the sky.Â  There was more howling back in the woods to the west.

“Can think you can race me home, daughter?”

Jae knew he was worried but she pretended not to notice. “I can beat you!” She took off with him right behind her.Â  They could see the smoke from the chimney of their house now.Â  Jae turned to smile at him and tripped.Â  As she fell she saw a sight that terrified her.Â  Right behind her father was the biggest grey wolf she had ever seen.Â  Her dad skidded past her and turned to pull her up as the wolf’s teeth closed on her leg.Â  Her father beat him with his staff til he backed off growling.

“Yes, da.” Her leg hurt. She got up and carefully put weight on the injured leg.

He walked backwards, never taking his eyes from the wolf.Â  The wolf growled once before turning and loping away.Â Â  Her father picked her up and ran toward home.Â  They had to get to Simon. He would know what to do.