The night she ate three helpings of broccoli – THREE! The girl loves her broccoli…and Tornadoes (tomatoes)

Dale spending several hours trying to figure out what she was trying to say – it sounded like “truck fix”  Caralee translated – chapstick. (She likes the red chapstick and the yellow (color of the tubes)

She does NOT ever ever ever want to lay on her back in the tub to get her hair rinsed. Melt down time.

Having her look up at me and say “I like it at Gamma’s house.”

Carolee watching me dish up ice cream and seeing that it is white, shaking her head and telling me she does not like it. She wants BROWN ice cream.

She loves to lay on the ground and draw in the dirt with a stick. She loves to be outside period. She will stay until her little hands are like ice and still does not want to come in.

Caralee sitting next to me in a booster seat at a restaurant, leaning her head on me and saying “I like you” I was ready to go buy her a car. 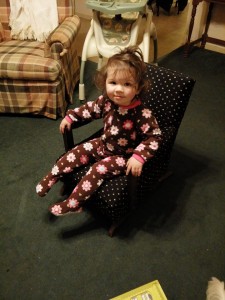 One thought on “Things I Want To Carry With Me”