I have been so dismayed at how mean and badly behaved we humans are. Most of the feeling came from reading things people wrote or shared on Facebook. Last night my husband and I went to a concert at a local venue. A local band opened (and I thought they were very good!) and Sundance Head  played later. As I am addicted to The Voice and he was a Voice winner we decided we would do something very much out of the ordinary for us. We bought tickets. It has probably been over thirty years since we have gone to any kind of concert and even longer since we have been to a bar. I am not opposed to people having drinks. I just don’t want to be around drunks. There was a bar at the venue. The room was set up with wooden spool tables in the circle closest to the band and then chairs behind those tables. I didn’t know you could reserve a table so we were on chairs just behind one of them. The group who reserved that particular table came in late and then people would come up to visit with them, standing in front of us…while the band was playing.  At one point a man squeezed in to talk to them and I actually had to move my legs until they were nearly in the chair with my husband to accommodate him.

The tickets stated from 7 to 11 pm. They actually opened the doors at 7. We sat and waited until nearly 8. There was a group of 30-40 year olds behind us who may or may not have imbibed before they got there. They were incapable of speaking in “inside voices” especially one very obnoxious guy who stood right behind me talking even after the first band started. If the band got louder so did he.

Couples started to move to the dance floor and at one point in the night Mr. Obnoxious actually hit me in the back of the head with his elbow as he headed out to dance without so much as an excuse me – I really didn’t mean to give you a concussion and in daily life I really am not such an ass.”

Back in the day (yes I am old) it was the girls who were shaking it on the dance floor. This group changed that. It was the men who were strutting it out there. There were two classes of dancers. Those who obviously paid for lessons and then practiced in bars, frequently. Then you had the Seinfeld “Elaine” type who after a few beers thought they were accomplished dancers but in reality if you were sober and watching, well, picture a fish thrown onto the bank and occasionally experiencing electrical shocks. Word to the ladies – if this is who you are dancing with – stop drinking. This is the one who will cause you to do the walk of shame in the morning.

We did enjoy the music but I doubt we will repeat this activity. I know they were just having a good time but the rude and drunk mating rituals of the American reduce are just not for me. I will watch The Voice in my own living room where I can actually hear the music in my comfortable chair and not have to worry about an elbow to the head injury. 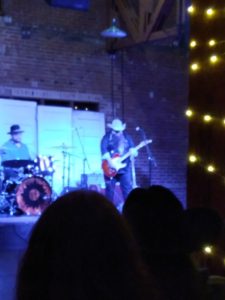