Friday night I joined a large percentage of the female population and went to see Twilight with my daughter and some of her friends.Â  I have NEVER waited in a theater for an hour to get in to see a movie before.Â  Not even StarWars, Harry Potter, or Indiana Jones.Â  We were probably in the first dozen or so people let in so we were able to sit near the back which I prefer – I hate getting a stiff neck.Â  There were a LOT of teenage girls in the theater so I was a little concerned that they would be talking and texting and the usual throughout the movie.Â  I needn’t have worried though – the minute it started they got quiet and except for the places where they laughed out loud at the movie the only noise I heard was an occasional comment about how something was different from the book.

Those comments made the whole thing a little surreal to me.Â  When is the last time YOU went to see a movie and heard a lot of teenagers commenting on the differences between the book and the movie?Â  I have always told my daughter that I would just as soon see a movie first and read a book second because if I reverse the process I am always disappointed. I like my imagination better than Hollywood.

My daughter and her friends had read the entire series.Â  I have only read the first book and it is a nice romantic story with some violence and vampires thrown in.Â  I know if I had read it in high school I would have been more enthusiastic – still it was fun to read, fun to watch the movie, and even more fun to listen to the girls who were all completely in love with the “totally perfect amazing, have to see it over and over again”, characters.Â  I was actually surprised at the amount of grown women sporting “real men sparkle” tee shirts.Â  I will read the rest of the series and will more than likely go see the rest of the movies as they are made.

This is not a movie for children.Â  There is violence and the “forbidden love” aspect and while I have heard some comparisons to the Harry Potter series I completely disagree.Â  Harry Potter does not have sexual overtones and there are messages throughout the stories that promote honesty, loyalty, and kindness.Â  While Harry Potter is science fiction and talks about magic, there is always this underlying confrontation of good versus evil and good always wins, even though there are trials.Â  There is a growth process that happens in the main characters as they mature.Â  Twilight is not about maturing – it’s about sexual tension, and the completely perfect (mainly because it is absolutely unattainable) romance. 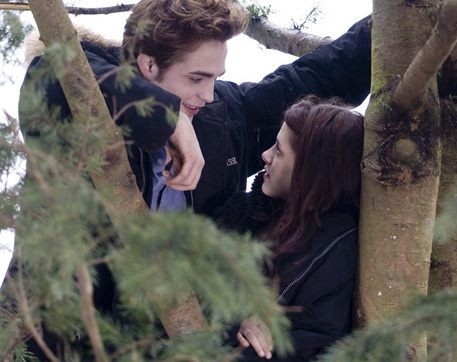