1.Â  The first presents I really remember getting were a Timex watch and a Brownie Camera and a John Gnagy Art Set.

2. I always knew which presents came from granny and papa because granny spelled Santa Claus – Sandy Clause.Â  I always knew when they came to the house Christmas eve to bring our presents.Â  We were in bed but I had the top bunk and would see their car pull up.

3.Â  I grew up in Michigan so I don’t really remember us ever NOT having a white Christmas.

4.Â  When I was about nine we drove into the city (Detroit) for Christmas dinner at my aunt and uncle’s house.Â  My uncle gave me a little glass of Cold Duck without my parents knowing it.Â  I remember eating dinner and wondering why my face felt so hot LOL

5.Â  We always had a real tree.Â  Dad would buy one on his way home from work in the city and pull up with it tied to the roof of his car.Â  We had the regular old time screw in lights and glass ornaments and tinsel. Mom used an old sheet for a tree skirt.

6. When I was old enough Mom and I would make ornaments.Â  One year we made all these felt birds.Â  She sewed them with a little stuffing in them and I decorated them with glitter sequins, and bits of ribbon and rick rack.Â  Because they were all jewel tone colors, we bought foil wrapping paper in coordinating colors and a bow maker and we wrapped presents to match the ornaments.Â  It was beautiful and we had so much fun.Â  We made sugar cookies and “painted” them with egg yolk and food coloring paint to keep up our “theme”.Â  My mom was very cool and I miss her often.

7. We attended a small First Congregational Church and one Christmas Eve a lady started out in the back of the church singing Ave Maria.Â  It was the first time I had heard it and I had shivers the whole time she was singing.Â  I could easily have believed it was an angel. 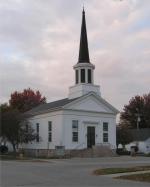 8. My youngest brother was born December 18th when I was 11.Â  Christmas was pretty quiet but Mom had done all the shopping ahead of time.Â  We had tv dinners that Christmas but I don’t remember thinking anything about it at the time.

9. Dale and I have bought one of those little brass ornaments every year we have been married.

10. One year we made every single gift including the ones for his sisters and our nieces.Â  I crocheted 3 entire wedding outfits for Barbies that year and even bought little shoes and bouquets and made veils.

11.Â  When Kinsey was three we went to see Santa and the only thing he told Santa that he wanted for Christmas was a snowball.Â  We lived in Louisiana!Â  I racked my brain and finally ended up buying a styrofoam ball in the craft section at wally world.Â  The kids got Power Ranger tv trays that year and they were sitting out on Christmas morning with new slippers and “snowballs” on them.Â  He was so excited that Santa had remembered!

12.Â  I made stockings for the kids when they were small and they are nearly two feet long with their names appliqued on them.Â  It got so it was almost as expensive to fill the stockings as it was to buy the rest of their Christmas.Â  Now they are perfect for the ubiquitous socks and underwear LOL.Â  The best thing about them being so big was that when the kids got old enough, they would get up before us and take the stockings to one of their bedrooms and spread out their goodies.Â  They would play for awhile and it probably bought us an extra hour or two of sleep!

13.Â  One year when Christmas Day fell on a Sunday the kids were all allowed to bring one of their Christmas presents to church.Â  They went down front with the pastor and he went through each toy and related it to a bible story.Â  I was pretty impressed at what a good job he did for thinking on his feet.Â  The kids were glad they could bring their prizes but the adults probably got more out of it than the kids.

14.Â  The year of “THE ICE STORM” I was warming up food Christmas day evening and the power went out.Â  We didn’t have electricity again til New Years Day.Â  The kids had gotten GameBoys for Christmas and we went to K-Mart and bought these little attachments that were lights so they could play the GameBoys (and extra batteries) – we ended up playing a lot of board games.Â  We had a gas stove and gas hot water heater and a King wood heater so we were never cold and kept food on a table made from a sheet of plywood in the garage.Â  We were a lot better off than most.

15.Â  Last Christmas Dale and I snuck home from Dallas a little sooner than he was supposed to.Â  Jessica had decorated the tree and Dale was still not recovered but felt so much better just being home.Â  We didn’t tell a lot of people because he wasn’t supposed to be around a lot of folks yet.Â  It was a time of just being grateful that he was alive and that we were home.

16.Â  This Christmas we look back on where he was last year and how far he has come and the gratitude has grown.Â  We had a quiet day with both kids here most of the day and just eating snacks and hanging out.Â  Simple things but miraculous too.Â  I hope you all have had a simple, joyous holiday celebrating the birth of our Saviour, Jesus Christ.Â  If we never receive another gift for the rest of our lives, we have already been given so much more than we deserve.