This was a special Easter for me as our church held our Easter service at the high school where I work.Â  he last two years it was held at a neighboring school with an auditorium that holds about 650.Â  Last year some people left because there was no place to sit.

Our auditorium holds a little over 1000 and I was worried that people wouldn’t come because the weather was bad this morning.Â  I don’t know any exact numbers, but it looked pretty full to me.Â  That’s just awesome.Â  It’s encouraging to see that many people, in one place, worshiping together – especially in a community this size.

The service began with the itty bittys singing and it looked like there was about 40 kids up there.Â  I got so tickled at a little girl in the front who was just about to dance, hopping and raising her hands whenever they would sing “Lord I Lift Your Name On High” – she was so cute.Â  She was just so excited to be up there.

I was thinking about an Easter before the kids were born when we lived in Littleton.Â  My best freind and I decided we would go to the sunrise service at Red Rocks which is a natural outdoor amphitheater formed by what they call the “hogback” where the foothills push up at the edge of the Rockies.Â  The guys had no interest in going so I made us a thermos of coffee and she brought quilts for us to wrap up in.Â  We left at 4 in the morning because a LOT of people go and it isn’t easy to park.Â  Even getting there early, we still had quite a hike up to where people were sitting.Â  It was beautiful and peaceful even in the midst of the crowd.Â  I found a picture on Flickr – not from back when I went but you get the idea. 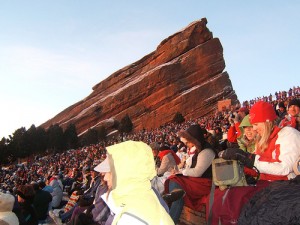 This gives just a hint of how big it is.

Hope everyone had a joyous, peaceful Easter holiday.Â  He is risen! Amen!