Every Friday night it was the same.Â  HE went and played cards with HIS friends.Â  It didn’t matter what she wanted.Â  She tried a time or two to make plans that included him but no, Friday night was sacred.Â  When she tried to talk to him about it he had the nerve to suggest she go shopping with his mother on those nights.Â  Like that was ever going to happen!

Well, enough is enough.Â  SHE would make her own plans for Friday nights and every night from now on.Â  Laurie had been giving this a lot of thought and she was sure she had every detail covered.Â  She might not be a poker player but she had her own game with her own rules and it was her turn.Â  No more full house for him.

SHE had her own deck and it told her what she needed to know.Â  She shuffled the cards one last time and cut the deck.Â  The queen of hearts.Â  What a laugh. She left it sitting there on the kitchen table next to her cell. She flipped her hair back, picked up her suitcase and climbed in the old chevy van.Â  She hated the thing.Â  It was like driving a tank.

Every Friday night he went to Tommys and played poker.Â  He was careful and he was pretty good.Â  He stayed sober and paid attention.Â  He had been winning pretty regular and socking it away.Â  Laurie had gotten kind of crabby about the Friday night thing lately.Â  He just needed a few more good nights to have the down payment on that sweet little yellow convertible she had been drooling over down at Smitty’s Auto Sales.Â  Just a few more. She was gonna love it and he was sure she didn’t have a clue.

Chuck passed him another brew.Â  He took a swig and thought about her reaction when he suggested she go shopping with his Mom. Boy, she was frosted.Â  He could tell by the look on her face.Â  He couldn’t wait to see the look when he walked her out to the driveway to see that car.

He had done pretty well tonight.Â  The last game he totally bluffed and Tommy folded.Â  He raked the money toward himself and the guys all moaned.

“I think we shoulda just gone down and bought the car for Laurie ourselves.” Chuck scratched his head and laughed. “Guess it wouldn’t have been near as much fun.Â  I sure hope it’s worth it.

Laurie crossed the bridge over Lake Pontchartrain as the sun was going down.Â  It would be a good five hours before he got home and realized she was gone.Â  She’d be the other side of Pensacola by then.Â  He would call her mama.Â  It didn’t matter, she was headed for Jax, beaches, and her cousin’s condo.

Two weeks later her mother forwarded the letter from him.Â  She opened the envelope to find a blank piece of paper wrapped around the photograph that slipped to the floor.Â  She bent to pick up a picture of Will standing in front of a yellow convertible in front ofÂ  Vegas casino.

He was smiling and holding the queen of hearts.Â  Laurie tore the picture into tiny pieces and threw them in the trash. 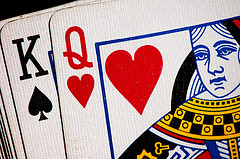 Tomorrow my short story “Ladies Night” will be posted on Every Day Fiction.Â  After reading some of the comments posted on the stories from the last two days I’m a little nervous.Â  A few friendly “faces” would be nice.

I’ll post the permalink here, in the morning when the story is up.

And here it is.

8 thoughts on “Play Your Cards Right”