I took a break from writing from prompts today and spent some time journeying back in time.Â  Here are some memories and stories to share.

Visiting my grandmother was always an adventure. She lived in Hamilton, Ontario which was about a two hundred mile journey.Â  I just looked up the distance this morning.Â  It’s funny, but I remember it seeming much farther. I know my brother and I must have asked “are we there yet?” at least a thousand times.Â  I don’t even remember what most of the scenery looked like – I was usually buried in a book. 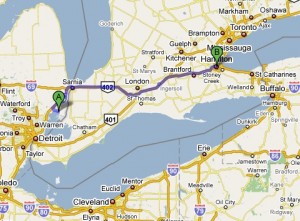 Grandma lived on the very end of Aberfoyle Avenue, at the base of the mountain brow, across from King’s Forest, which had very few trees – just rolling hills and meadow.Â  There is a little road running out to the middle called Whitehouse Road.Â  Back then it was actually the driveway to a lonely, faded and peeling, two story white clapboard house.

My favorite place was a very old tree that was growing out of the side of a hill in such a way that one of it’s roots was out of the ground and formed a natural bench, sheltered by the branches.

I would take an apple and my sketchbook and sit looking out at that old house.Â  I imagined there was a girl locked upstairs, peering out from behind the curtains.Â  I would try to think of ways to sneak closer and see if I could catch a glimpse of her.Â  I had just read Jane Eyre and I’m sure was feeling the influence.

With the city behind me, a mountain rising to my right, and the horizon stretching on forever, the place had an edge of the world feel to it.Â  Throw in a cloudy day with a little bit of fog and you had the perfect scene for a Gothic novel.

I’ve since learned that Aberfoyle Avenue, the name of her street, is also the name of a village known as the Faerie capital of Scotland.Â  It was named appropriately.

visitaberfoyle has this to say:

The village of Aberfoyle sits astride the Highland Boundary Fault Line, which separates the Highland from the Lowlands of Scotland.Â  There is a strong magnetic field found on this geographical line.Â  It is in such an area that the mythology of the Celts is at it’s strongest and the activities of Celtic Faerie People are most evident.

He heard, he saw, he knew too well
The secrets of your fairy clan;
You stole him from the haunted dell,
Who never more was seen of man,
Now far from heaven, and safe from hell,
Unknown of earth, he wanders free.
Would that he might return and tell
Of his mysterious company!

And half I envy him who now,
Clothed in her court’s enchanted green,
By moonlit loch or mountain’s brow
Is chaplain to the Fairy Queen.

The Rev. Robert Kirk was the minister (Episcopalian) for the parish of Aberfoyle from 1685, when he succeeded his father in the post, until his mysterious disappearance in 1692, following publication in 1691 of his book,Â  â€œThe Secret Commonwealth of Elves and Faeriesâ€.

Of course I’m all grown up and I know that fairies don’t exist.Â  Kings Forest is now a ski and golf park and my grandmother is long gone.Â  She came to Canada from Glasgow which is only about forty miles from Aberfoyle, Scotland.Â  She probably heard the stories and legends and I can imagine her believing in fairies when she was a girl. Life was hard in Scotland and IÂ  picture the Scots shepherd in the Highlands with nothing but sheep and a good dog for company.Â  Cold and tired with the mists playing tricks on his eyes, it would have been easy to let his imagination turn to give name to the outside influences on his daily life. 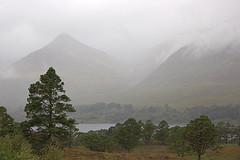