Three Word Wednesday : karma, obey, wither and two days of one word: amber and shield with a little fiction in 58 thrown in with just a pinch of Carry On Tuesday.

He carried her for two miles.Â  She weighed next to nothing. She was his Amber and now she was gone.Â  He tried it the worlds’ way. He obeyed every rule he knew.Â  He did nothing to have karma spit on himÂ  but here he was, with nothing to shield his heart that would wither and die without notice.

One Word: Microphone and fiction in 58

The song was her best work.Â  She settled herself on the stool in front of the microphone and strummed softly.Â  She sang her life, all sheâ€™d learned, all her love. What couldnâ€™t be said with words was hidden in chords.Â  The light never changed.Â  One by one they got up and silently walked out. They didn’t hear her.

One Word: Crane and Fiction in 58

Gerald craned his neck trying to see around the man in the leather jacket.Â  He felt rage building in him.Â  This was his scene!Â  He had staged everything for the perfect effect.Â  She was hanging from the dumpster, displayed so that anyone with a brain could see his message.Â  Leather jacket would be part of his next tableau.

One Word and Fiction in 58

I remember crossing the street.Â  That’s the last I remember.Â  I turned to wave goodbye one more time and he smiled the oddest smile. For that moment I focused on nothing else.Â  Voices speak as though I am not in the room, machines hum, things are done to me.Â  I catch whispers. Collision.Â  Coma.Â  Why was he smiling?

The dark days when she felt like she would drown in the fear were over.Â  He was really gone and she could breath again.Â  Smiling, she closed the door with her foot and set her purse and grocery bags on the counter.Â  “Oh no!” she gasped as she turned and saw the orchid on the kitchen table.

One Word prompt: penny and fiction in 58 times three

A new love, bright as a new penny, not touched or spent like it would become later.Â  Who thinks about later at the start when it is all light and hope.Â  Later doesn’t get attention until it’s too late to do anything about it.Â  Hindsight is useless.Â  It develops when we’re too far down the path to change.

“Penny for your thoughts?”Â  He said.Â  But he didn’t really mean it.Â  He wanted at least ten dollars worth so he could use it against her, punish her for some transgression she didn’t even understand and didn’t commit.Â  It was always the same.Â  He would get her to open the wound and then he would twist the knife.

It felt good, walking in the sun.Â Â  She threw a penny into the pool, making a wish.Â Â Â  A kid bumped her as he ran by with his mother chasing after him.Â  “I’m sorry”Â  she blurted as she ran past, arm outstretched towards him.Â  “It’s okay.” I said, smiling at my reflection in the pool, and it would be. 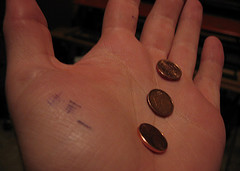 One Word: Logical pared down to fiction in 58

One Word: Pit and Fiction in 58

You know that feeling.Â  The one you get in the pit of your stomach.Â  The one that tells you that whatever choice you just made will have consequences and regrets. The one that makes you afraid to look back, walk faster. What was I thinking?Â  Doors squeak, stairs creak, shadows fall.Â  Light a candle, the dark is coming.

Three Word Wednesday: Fracture, Noise, and Vanish plus Fiction in 58 for good measure

In that one second, that one moment on which everything turns, the view fractured all at once, pieces of glass on the floor.Â  Careful not to cut your feet. No noise, not a peep, no – not one sound. There is a body. There is always a body. Slip out the back door and vanish before the sweepers come.

It was bright yellow, with a black convertible top.Â  Chrome wheels and chrome around the headlights.Â  She couldn’t wait to drive it off the lot.Â  She closed the door, put on her seatbelt and breathed in the new car smell.Â  She pulled out of the parking lot, adjusting the radio as the eighteen wheeler shifted to another gear.

She had made her list and checked it twice.Â  Everything was in place.Â  All that was needed was an opportunity, one more nail in the coffin and she would be rid of her forever.Â  Waiting was excruciating but had given her time to plan down to the last detail.Â  The sun was sinking and her expectations were rising.

One Word and Fiction in 58

They sat on the dock , shoes off, feet in the water.Â  He would look awayÂ  and kick the water so some would splash.Â  She would yell, smack him and in a moment, do the same thing.Â  The sun was shining and they didn’t care.Â  They were just passing the time.Â  Everything was fine until the body floated by.

She dove under again and swam as far as she could before coming up for a gasp of breath.Â  She had been swimming for hours, hoping the chlorine would cleanse her body.Â  Maybe exhaustion would cleanse her soul, but she doubted it.Â  He was gone butÂ  memories he left behind wouldn’t leave town as quickly as he did.

One Word: Gallery squeezed into a Fiction in 58

He glanced right and left at the gallery walls as he worked his way up to the present.Â  A first visit to the family home of his fiance and he was lost.Â  Each painting showed a different groom but the brides looked alarmingly like his, same dress, same earrings.Â  How was he going to get out of this?

Fiction In 58 and One Word prompt: collapse

She built her case, brick by evidentiary brick, documented in triplicate, what was once called iron-clad.Â  He searched for loopholes and shimmied in and out as he pleased.Â  She had it wrapped up, tied up in a bow, buttoned down.Â  He was free and easy, breezing through the front door and out the back when it all collapsed.

She scrubbed the porch with water and an old broom.Â  Sweat made her shirt stick to her. He went fishingÂ  with his idiot buddies using grocery money for beer.Â  “I hope he brings home fish or falls overboard.”Â  She thought.Â  He had promised her daddy he would take care of her. This was not what her daddy meant.